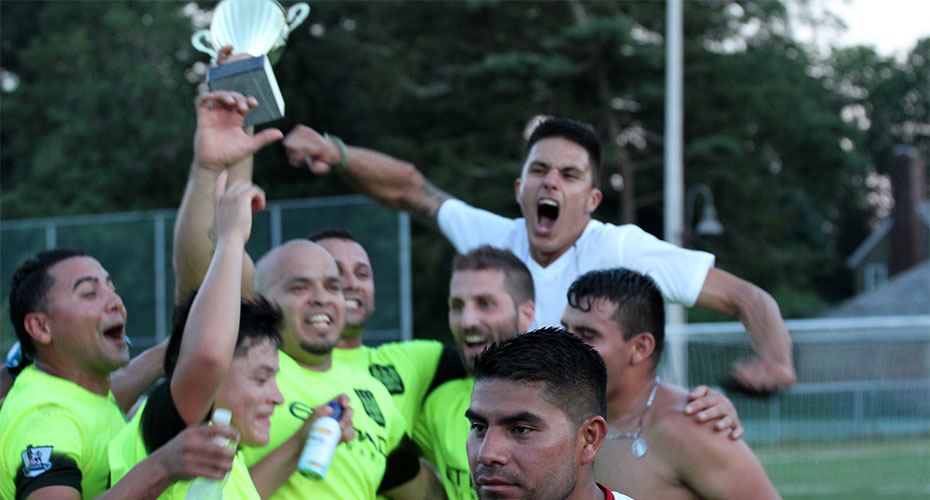 Both sides had their full teams ready to play with action at both ends of the field. Two 30 minutes halves would be played. Just three mimutes into the first half, Hampton FC could have scored. Danny Salazar steals the ball inside the Bateman goalie box and hits it to team mate Gehider Garica, who is at about the 10 yard mark. Gehider fails to hit the bouncing ball into the net.

About 22 minutes into the half, Carlos Portillo of Bateman, hits the ball to the far side where Rafael Santos is standing. Santos is unable to get control of the ball to fire a clean shot into the net.

About 23 minutes in, Cesar Correa has the ball and is able to dribble to the 18 yard mark to blast a shot toward the near corner net. As the ball approaches, Bateman goalie, Cristian Rios, dives and with his finger tips is able to push the ball enough so that is strikes the cross bar and bounce to the opposite side out of the net. A great save for Rios.

Over-all both sides had their chances to score.

The second half started as the first left off. Play was physical with both sides yelling that calls were missed by the referee. At about the 35 minute, Hampton FC is given a indirect kick inside the Bateman goalie box. The kick is taken with the ball deflecting off the wall and Clinton Perez, of Hampton FC, firing the ball again just wide of the goal post.

As time was elapsing, it was looking as the game would end up in a draw. Gerber Garcia, Hampton FC defender, has the ball inside his half at about the 25 yard mark. Gerber Garcia, to move the ball quickly fires a high floater toward the Bateman goal. Standing just in front of the goal was Rios. As the floats down, with everyone thinking that he will easily grab it, the ball goes between his fingers and bounces on the ground behind his back. In the mean time, Jose Almansa of Hampton FC, comes running to hit the bouncing ball into the net as Rios turns around to see what has just happen. A great, unexpected goal for Hampton FC. With that goal, you could feel that the atmosphere of the Bateman side change. They let up an easy goal. It must have been the same type of feeling when the Maidstone keeper, in the Fall 2015 championship match, also tried to grab the ball but mishandled it and watched it roll off his fingers into the net to give Hampton FC the lead.

Being a goal down, Bateman still had time to tie the game but it was looking bleak for them. So at the 47 minute mark, Rios comes out and fouls a Hampton FC forward inside the goalie box. A penalty kick for Hampton FC, which Cesar Correa takes and scores to give his team the victory for sure.

At the 53 minute, Gehider Garcia, is given the ball just outside the goalie box. Garcia is able to dribble in and fire off a low grounder into the far side net to put the game away and bring home another trophy for this team.

It was over for Bateman with the clock ticking down. Bateman had a chance to score when Romulo Tubatan had a one-on-one with Hampton FC goalie, QuiQue Araya. Araya comes out and is able to block the shot by Tubatan. With that block, Hampton FC goes on to celebrate another championship.

*Note: Player within this count had an 'Own Goal'